Your browser does not support HTML5 video. So happy that I took the time to compare all the products to determine which is the best LED strip lights out there, and this is without the doubt the best one! It sticks well to the wall. If you need to adjust after you already applied it, you just peel the strips off slowly (so that the paint doesn't come off), and reapply it where you want it! I do want to point out something that would be helpful for y'all. -- If you're looking for connectors to connect separate strips, DAYBETTER suggests "5050 4Pin Non-Waterproof RGB LED Strip Connector Kit includes 2 x Female Connector Wire, 2x L Connector Cable, 3x L Shape Connectors, 3x gapless Connector, 10x LED strip light clip,5x 4-pin Male Conne " on ! Do not purchase these connectors "TronicsPros 10pcs 4 Pin Solderless Waterproof LED Strip to Strip Connector RGB Flex LED Ribbon LED Rope LED Tape Light Gapless Adapter for 10mm Wide Waterproof SMD 5050 RGB Flexible LED Strip Light" that is seen as "Frequently Bought Together" with DAYBETTER LED strips. These waterproof connectors don't work as they aren't compatible with non-waterproof LED strips.

Your browser does not support HTML5 video. So I just purchased these lights and so far so good. I had another set by another company that was a little bit thicker and the adhesive wasn’t as strong so kudos to DayBetter. First off I want to start with unboxing and work my way through. Also from my video keep in mind I have 4 strips across. The two that came in one box covered from my light switch all the way to the middle of my tv. The rest of the door and the wall above my window was done with two more strips and 3 connectors.Unboxing: The box is pretty small but both strips of lights are rolled up inside neatly. They leave a little extra slack on the end of the 3M adhesive so you can start it easily with out having to pick at the beginning or cut anything. The 12v AC/DC adapter comes with this as well as the RGB control box with two connectors and the IR Receiver.Application: I tested all strands of lights out and they worked perfectly fine. The reason I said 4 stars on brightness is because I haven’t seen them all at night yet (only saw two strips not 4. Will update afterwards.) the 3M tape on the back of the lights peels off with ease. When applying make sure you have your lights lined up the way you’d like them because the tape is pretty strong. Besides that the lights go on fairly easy and I don’t think falling off will be an issue at all with these.Display: The colors all function properly and are quite vibrant. I still don’t know how to work the custom feature yet but I’m sure someone does or will figure it out. I’m pretty content on the colors already provided.Connecting: So like I said I have 4 strips on here. I had to use three connectors total but it doesn’t weaken the power or dim the lights at all. I bought them on as well and the product name is “ TronicsPros 10pcs 4 Pin Solderless Waterproof LED Strip to Strip Connector RGB Flex LED Ribbon LED Rope LED Tape Light Gapless Adapter for 10mm Wide Waterproof SMD 5050 RGB Flexible LED Strip Light”. I had to flip them upside down I guess to get them to touch the GRB strip. Make sure that they are on the same way otherwise you may get two different colors. To open them I just used a mini flat head and gave it a light twist and the opened with ease!I’ve added pictures here and if you have any questions please feel free to reach out!

Your browser does not support HTML5 video. This product is amazing definitely will be purchasing again. The description is exactly what you get and how it looks however it’s even better once it comes! It’s so bright and so many different color options. You can even adjust the brightness. In love with this product! Make sure you get at least two boxes If you’re doing your whole room. It literally brightens up your whole room i love! 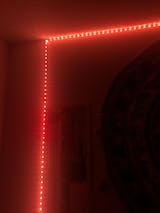 R
Rjames
Lights are awesome and they seller is top notch- bent over backward to help us!

Ordered two boxes on Monday and Successfully installed the lights. The first boxes had black connectors on either end allowing me to chain two strips from each side of the power pack. Ordered two more boxes and delivered on Wednesday and there are no connectors on one end. They just make them this way now as we found out. You need to use additional little white coupler connectors (sold separately) In order to connect twoBoxes worth of lights to one power pack. Seemed a little frustrating at first, but using these little white connectors looks a lot better than my original install with the lights that had the black wire on both ends. The seller bent over backwards to let us know this is not a manufacturing defect and sent us a lot of correspondence to get us set up properly. He even paid for the additional white connectors we needed.

My wife and I recently had a screened porch converted to a sunroom, and my wife wanted to add some sort of mood/celebratory lighting. After considering a number of options, we found the Daybetter R5032 at a terrific price, and placed an order for one package. Once we received the R5032 package, and started considering how we could mount the LED strip(s) we decided we would like to mount the light strips in a trough near the ceiling and use them to provide indirect lighting for the room. The two 5 meter LED strips would allow us to place lighting along two walls of the sunroom. Not being able to decide which two walls should carry the lights, it seemed to make more sense to place the lighting all the way around the room so we considered ordering a second R5032. This would mean that we would have two controllers, and two IR receivers possibly placed in two different locations in the room. The LED strips come with connectors on both ends making it seem like they could be connected in series, but this is not supported by Daybetter. The controller has two separate leads each of which connects to one of the 5 meter LED strips. Connecting both LED strips in series to one of the controller power leads would burn out the controller. In order to place both IR receivers in the same location, but have one of these controllers control lights that were 5 meters away, we needed extension cables that would allow power from one controller to run to a LED strip 5 meters away. I contacted Daybetter customer support to ask if they sold such extension cables. The next day I received an email that said they did not carry any such cables, but they did provide a link to a company that sold such cables through , and they were willing to help offset the cost of the cables. Thanks to this quick response, I ordered a second R5032 package from Daybetter, and a set of 4 four-conductor 3 meter extension cables from HUALAND. Connecting two of the extension cables together gave me enough length to reach an LED strip 5 meters away. The next issue became how to build a trough in which the LED stips could be mounted. I found a solution at my local Lowes where I discovered a vinyl door edge that was a bit larger than the 0.5 inch width and height needed to conceal the LED strip. The size was perfect (UnmountedTrough.jpg), and the price was a tenth of what wood trim would cost to cover the same length. Since the trough was vinyl, I needed to insure that the LED strips did not generate enough heat to melt them so I laid out the LED strips and turned them on to full brightness to evaluate the amount of heat generated by the circuitry on the strip. The heat through the resistors on the LED strip was barely detectable. I painted the door edge trough and installed it at the bottom edge of a 1 x 2 trim piece that already went around the room (Trough+IRsensors.jpg). I ended up installing the LED strip along the back edge of the trough rather than the bottom of the trough because I did not think the horizontally oriented LED strip would bend nicely around 90 degree corners (LEDinTrough.jpg). Bending a vertically oriented LED strip around the room's 90 degree corners was no problem. Once the trough and the LED strips were installed, I then needed to place two power packs and two controllers somewhere hopefully out of sight. An attic is directly above the sunroom so I decided to drill a hole in one corner of the sunroom ceiling, and route the 4 conductor power cables through the hole into the ceiling where the two power packs and the two controllers would be mounted. The power pack cords were long enough to allow them to be installed almost anywhere convenient in the attic (PowerPacks+Controllers). The two controller modules had to be installed right next to the hole in the attic floor so that the IR receiver cables could pass through the hole and be aimed out to the center of the sunroom (Trough+IRsensors.jpg). One remote control sends a command that is received by both controllers so all light strings react in unison. The results are highly satisfactory as I hope can be seen from some of the included pictures (LEDsunroom1-7.jpg). The light strips provide a wide range of colors at about 5 intensity levels, and the adhesive backing made mounting in the trough super simple. The product works great for us, and the customer support was outstanding.

12
Back to LED Strip Lighting
Sophia purchased a

5 minutes ago from Portland, OR.
Madison purchased a

7 minutes ago from Boise, ID.
Emma purchased a

4 minutes ago from Phoenix, AZ.
Jackson purchased a

8 minutes ago from Austin, TX.
Aiden purchased a

8 minutes ago from Los Angeles, CA.
Ava purchased a

13 minutes ago from Cheyenne, WY.
Liam purchased a

5 minutes ago from Atlanta, GA.
Mia purchased a

19 minutes ago from Portland, ME.
Lucas purchased a

13 minutes ago from Denver, CO.
Isabella purchased a

6 minutes ago from Hartford, CT.
Noah purchased a

17 minutes ago from Topeka, KS.
Zoe purchased a

13 minutes ago from Boston, MA.
Mason purchased a

7 minutes ago from St. Paul, MN.
Lily purchased a

19 minutes ago from San Diego, CA.
Ethan purchased a

8 minutes ago from Harrisburg, PA.
Caden purchased a

13 minutes ago from Albany, NY.
Logan purchased a

14 minutes ago from Santa Maria, CA.
Emily purchased a

13 minutes ago from Portland, OR.
Bryan purchased a

5 minutes ago from Boise, ID.
Nicholas purchased a

4 minutes ago from Phoenix, AZ.